This is not about Donald Trump or his political views but about our own biases and assumptions and how they can make us deaf, blind and stupid.

A while ago I started trying out an app called Brigade. It’s a community app where people can voice their opinions on topics that matter to them. And we all like to do that in one way or another. Be it in the pub, online, with just our friends or family, commenting on a TV show, … It can take many forms and I too like to have my voice heard.

Then you can choose to agree, disagree or take the option ‘unsure’. There is also an optional possibility to add an argument to explain why you take a certain stance.

While scrolling through these statements this one pops up:

I had to look up corporate inversion. It comes down to corporations off shoring parts of their organization to foreign countries in order to avoid taxes.

So what happened? I had a pretty big emotional reaction to the name Donald Trump. And the first thing that came to mind was: what kind of bullshit is he up to now? I was pretty sure that, whatever it was, I would be against it. Then I saw the definition above and something called cognitive dissonance kicked in. Because, you see, I don’t like Donald Trump or anything he stands for. So, I had a very strong emotional urge to disagree with anything he says, even though it makes sense. I literally sat in my couch for at least 2 or 3 minutes, having a mental fight in my head. It went something like this:

It went on for a while but in the end I did click the ‘I agree’ button. It took almost a full day for the uncomfortable feeling to go away but in the end it did.

This is a phenomenon that we all get confronted with and it is not an easy one to deal with. It permeates our society and sadly enough, it is dominant in politics, the one place where people really should know better. It is destructive when applied to policy making because it gets in the way of taking well balanced and informed decisions. 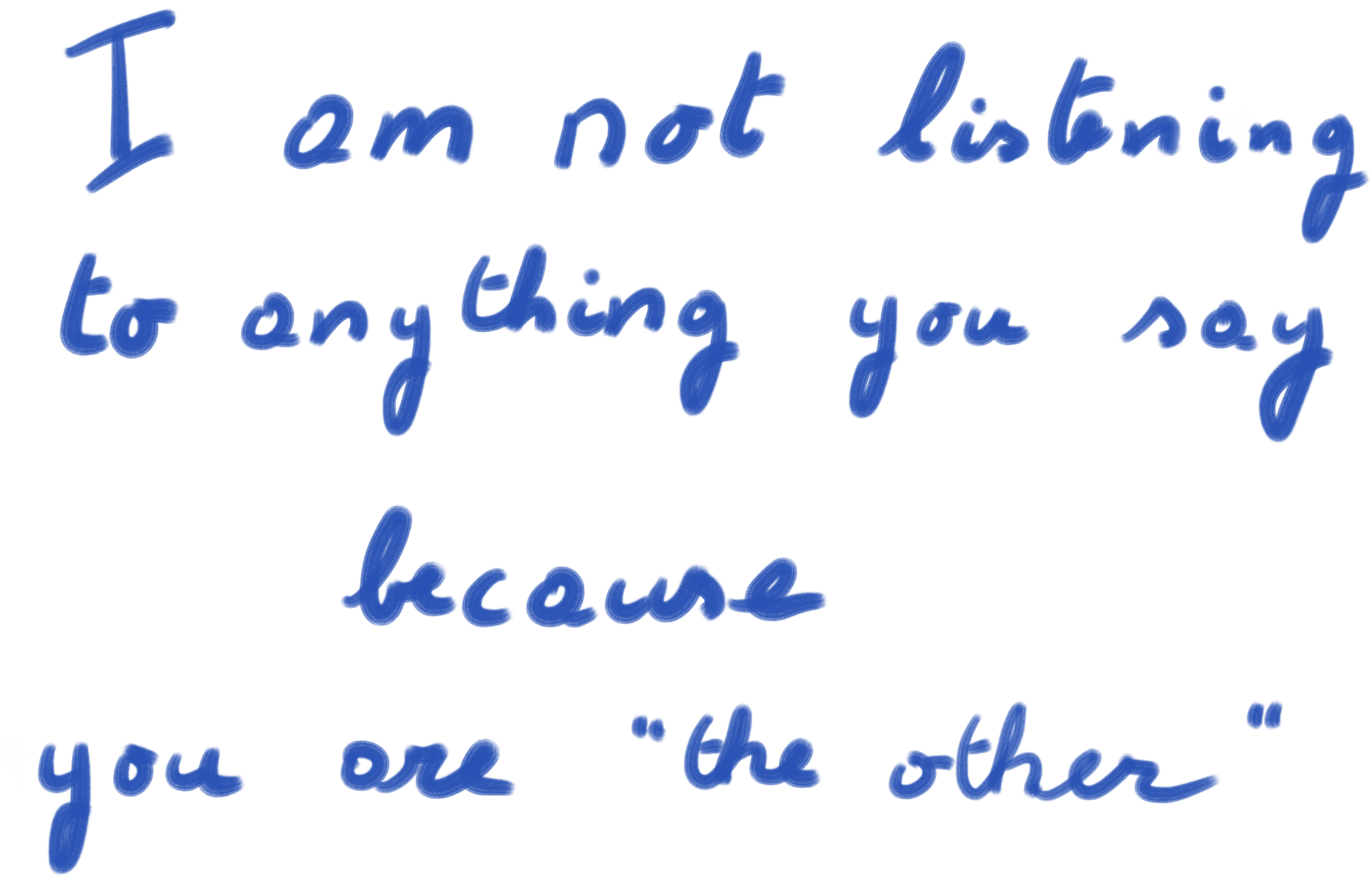 How often have you seen this in political debates? One party attacking the other, not based on arguments or logic, but just because it’s ‘the other’ who said it. More often than not, there is not even an inkling of understanding why someone makes a certain statement. There are no questions asking for clarification, there is no curiosity, no request to back things up with data. The statement immediately, and subconsciously, goes through the bias of ‘I am against this person or party’ and quickly formed assumptions, straight to interpretation, judgement and a strong effort to shoot it down. Often mixed in with some personal attacks.

This means that we exclude potentially good ideas on the basis that it comes from the wrong mouth. I wonder how political debates would go if everyone in the debate would be anonymized. Imagine something like those shows where there is a mystery guest you can not see him/her and his/her voice is computerized. Now project that image on a political debate where every participant is a mystery guest and they are not allowed to give clues as to who they are. They are only allowed to talk about content. Could be an interesting experiment.

Dealing with cognitive dissonance is not easy and comes with levels of discomfort. It also has to do with the fact that we tie our identity to certain opinions and beliefs or belief structures such as political parties. Having that opinion or belief attacked when we linked it to our identity results in feeling like it’s a personal attack and it triggers strong emotional reactions, virtually making us deaf and blind for the obvious facts that are right in front of us.

It is possible to work through it though once we are aware of this and are willing to face it. This means admitting we are wrong, or even worse, that this person that we dislike so much might be right, at least on this one topic. I believe it’s a crucial step in anyone’s personal development though and it is a tremendous help when we want real solutions to complex, challenging situations like poverty, income inequality, cultural tension, climate change, …

Where do you see it pop up in your life?

Here’s me, hoping that we all become better at dealing with our biases so that together we can create a society that works for everyone.

Long overdue! Our paper on the properties of our current monetary system got published! And it’s not behing a paywall ;) doi.org/10.3390/jrfm14… #money #growth #sustainability #economy #finance #banking

I'm pretty stoked about this! Our very first academic paper (about the properties of our current monetary system) has been published in the Journal of Risk and Financial Management (JFRM). #money #economy #growth mdpi.com/1911-8074/14/7…

Preprint version 2 of my paper is now online. Keeping my fingers crossed that publication in #JFRM will follow soon. #Economics #money #growth doi.org/10.20944/prepr…

Long overdue! Our paper on the properties of our current monetary system got published! And it’s not behing a paywall ;) doi.org/10.3390/jrfm14… #money #growth #sustainability #economy #finance #banking

I'm pretty stoked about this! Our very first academic paper (about the properties of our current monetary system) has been published in the Journal of Risk and Financial Management (JFRM). #money #economy #growth mdpi.com/1911-8074/14/7…

Preprint version 2 of my paper is now online. Keeping my fingers crossed that publication in #JFRM will follow soon. #Economics #money #growth doi.org/10.20944/prepr…